HEARTKEEPER by B.T. Lyons
Book One in the Heartkeeper Saga
(Middle Grade- YA everyone) 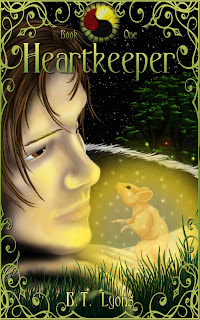 Heartkeeper is free on Amazon


“People of the Field, of the Cave, of the Forest, and of the Mountain, and all the places and habitats in between, our race is able to gather here tonight because in time past we found that we were not the warden of the Earth, but the Earth was our warden, our sustainer, our parent...”

Mankind has survived the near-collapse of life as they knew it, now living in harmony with the world around them.  Adain, a young Tenderfoot of this Future Earth, is about to take part in his Heart Chase – the search for a companion animal spirit that will act as his companion and conscience for the rest of his life.  Success in the Heart Chase and surviving the subsequent Trials over the year ensures his place amongst the People as an adult, but failure means his certain death...
...and his whole future lies on the Heart of a mouse.

Heartkeeper  is the first book in the “Heartkeeper Saga”, an epic adventure of friendship, challenges, and danger as humans struggle to regain their foothold in a new world that is no longer theirs to control.  Can they survive in balance with the Earth, or will the Earth decide they no longer belong? 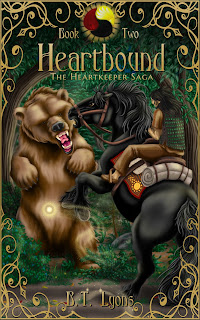 It's a new year, a new batch of Tenderfeet, and a new Heart Chase... but it is not the joyous occasion it has been for generations.

Shan, a Tenderfoot from devastated Sunperch Village, wants nothing to do with Hearts, the Heart Chase, or the Trials.   All he wants is for the surviving children of his home to be safe... and he's willing to do anything to protect them.

Cill, now the youngest Heartsworn ever chosen by the People, is thrust headlong into a side of his People's culture that is changing daily, where the answers to life's challenges are never easy and what is “right” is not as obvious as it once seemed.

New alliances will be forged, an entire way of living will be questioned, and the mystery of the Hearts and the Guardians deepens in  Heartbound, Book Two of the Heartkeeper Saga.

Interesting Facts:
One thing that makes this cover extremely exciting is that the artwork was created by the author herself! (To see more of her art, check out her  art page on her website.)

The novella of Heartkeeper was featured in Clean Teen Publishing's break through anthology,  Wonderstruck  and has received numerous outstanding reviews. When B.T. Lyons accepted our invitation to submit a full length novel for this fantastical story, we were so pleased. All of us at CTP are super excited to have such a talented artist and writer on our team!

Get to know the Author

B.T. Lyons' List of Top Ten Books – Appropriate for Many Ages
I never grew up, and my favorite books reflect that very clearly.   I am just as likely to curl up with a children's book as I am with the latest Dan Brown or Stephen King.   For this list I have compiled my favorite books of all time that can be enjoyed by young adult readers and up, with many on the list appropriate for children of all ages.   In the spirit of Clean Teen Publishing's content disclosure policy, I've made notes about anything that parents or readers may want to be aware of ahead of time.   I've marked these with a star and a brief description of what they include so that you may use your best judgment; however, it should be noted that all of these books are common in middle or high school libraries (if not the children's section) in schools in many countries, and have been enjoyed by readers for years, so please do not think that a notation of “adult situations” is the equivalent of the content of an adult magazine, for example.   Those marked with a star are ones that I would take a look at before handing them to a child under twelve if the notes are of concern to you.
1.)    *Watership Down  by Richard Adams –  not just a simple story about bunnies, this is a remarkable book about freedom, oppression, and survival by wits.   Not to mention it has some of the best modern fairy tales (for rabbits) ever written snuck into some of the chapters.   The animated movie of this book is a Christmas broadcast tradition in the U.K. . (Includes violence between animals, references to natural animal behaviors of adult nature)
2.)    *Good Omens: The Nice and Accurate Prophecies of Agnes Nutter, Witch  by Neil Gaiman and Terry Pratchett –  very simply the funniest romp in the Apocalypse you will ever take.   I also blame the authors for being prophetic themselves, for after reading this book my 1976 Toronado got “The Best of Queen” jammed in its 8-Track player.   You'll have to read the book to understand. (Mild language, references to adult situations, violence, references to drinking and smoking; reader MUST have a sense of humor in relation to Christianity and religion to appreciate this one.)
3.)    *The Cat Who Went To Heaven  by Elizabeth Coatsworth –  a Newbury Award-winning children's book that everyone should read, about a cat in ancient Japan.   Bring tissues. (Emotional ending; though this is a children's book, if your child has lost a pet recently, read it first before deciding if it is the right time for your child to enjoy it.)
4.)    Momo  by Michael Ende –  little-known on the American side of the pond, this book by the author of  The Never Ending Story  will be loved by anyone, but will be especially appreciated by those who never seem to have enough time.
5.)    The Mrs. Piggle-Wiggle Series  by Betty MacDonald –  these classic books are wonderful for young children, bedtime reading, and threatening those who don't want to take a bath or don't clean their room with delightful magical cures for misbehaving.
6.)    *The Hitchhiker's Guide to the Galaxy  by Douglas Adams –  brilliant British humor about the destruction of the Earth, how to travel for free between the stars, the answer to Life, the Universe, and Everything, and why you should never go anywhere without a towel.   (Mild language, adult situations, violence, references to drinking and smoking.)
7.)    *Tailchaser's Song  by Tad Williams –  incredible tale about a cat's journey to the ends of the earth and beyond to find his lost friend.   Blows the “Warrior Cats” series out of the water. (Violence between animals.)
8.)    *The Jungle Books  by Rudyard Kipling –  THE classic children's stories with talking animals. Though I rarely recommend a movie based on a story as much as a book, don't miss Chuck Jones' (of Bugs Bunny and the Grinch fame) animated version of  Rikki Tikki Tavi  if you can find it. (Violence between animals.)
9.)    *Childhood's End  by Arthur C. Clarke –  one of the best science fiction books ever written, hands down.   Deep, philosophical, and for more advanced readers.   Extremely impressive as a book report.   (Mildly written but emotionally powerful.)
10.)                   *Anything by Mark Twain –  no top ten list is complete without Samuel L. Clemens.   My personal favorites (although I love all of his writings) are  A Connecticut Yankee in King Arthur's Court  and the short story  The Celebrated Jumping Frog of Calaveras County.   (Works may include racial references that were common at the time of the writing but are considered offensive by today's standards.) 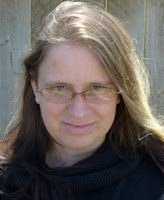 B.T. Lyons was born in 1973, growing up in Boylston, Massachusetts, and lived her early life working on the family goat farm and learning wilderness survival skills in the surrounding woodlands.  She is a jack-of-all-trades, having worked as everything from a zookeeper to bookstore manager, to a horror theme park actress, to a radio personality, to a builder of utility trucks. In a current fit of happy mid-life crisis, she is a history major at South Dakota State University in Brookings, SD.

She shares her home with her husband and her thirteen-year-old daughter, as well as a rat terrier, a Pomeranian, a ball python, and a rotating guest list of foster animals from the local humane society. B.T. is a rabid video game addict, and also enjoys drawing and creating various Neolithic-style handcrafts as her other hobbies. Her role models include Jim Henson, Jackie Chan, Hiyao Miyazaki, and Bill Cosby, and she is inspired by authors such as Richard Adams, Tad Williams, and Ray Bradbury.